My road to the Greater Manchester Marathon had several ups, potholes and downs but in the end luckily all came together. 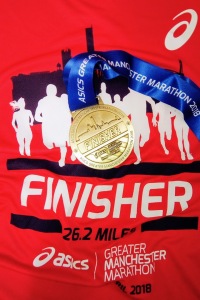 As Dutch Military I was lucky to be a member of the Dutch Defence Forces long distance race team for the past years. This allowed me to run marathons in Suriname, South Korea, Italy and Canada … a nice ‘running’ bonus for working for the Dutch MOD.

The qualification limit for the team is 2.40. This is a time within 60% of the average Military marathons race times. The Dutch MOD do not have ‘professional’ athletes like some other nations (up to Olympic level, for example Poland) but want to promote fitness and healthy competition within the International Military Sport Federation (CISM) based on the slogan ‘Friendship through Sport’.

There are no age categories in the Military Sport World. It does not matter if you are a young soldier of 20, or an ‘older’ (ahum) officer like me of 48. You need to qualify and for me January would be the month of THE DECISION!

To compete or not to compete in a spring marathon in order to qualify for the Military World Championship Marathon in November 2018.

I used the Saturday weekly (in the UK at least) well-known 5km parkruns around Northwood to get up to speed and measure, hopefully, progress. If I was able to get the speed back up to about 4 minutes per kilometre I thought / hoped I would be able to get to the required pace of 3.48 per kilometre for a 2.40 marathon time in the months ahead towards spring time.

Endurance is not the issue for me. I love long distance trailrunning and many weekends I go out for at 30km+ trailrun, enjoying the long distance footpaths, right of way tracks through forest and country side, stopping at kissing gates or to find my way back. But that is something completely different than running 3.48 per km for 2.40 hours! 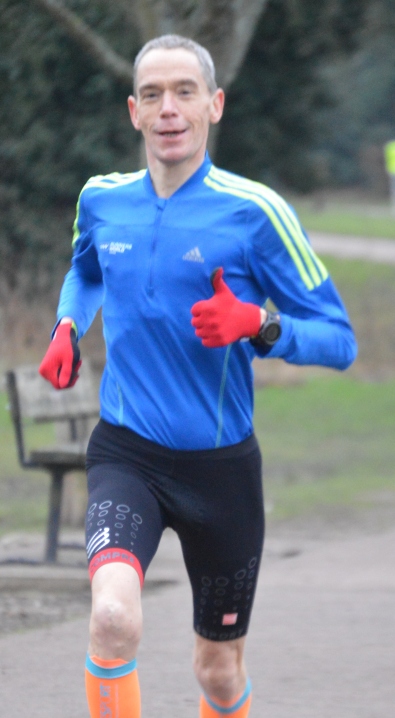 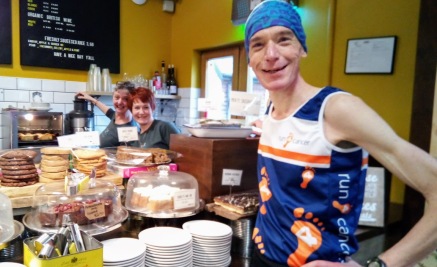 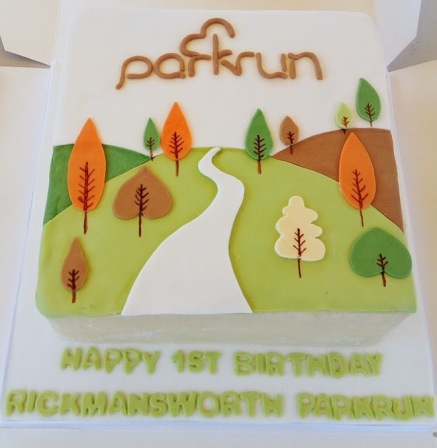 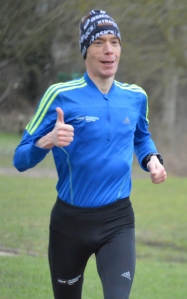 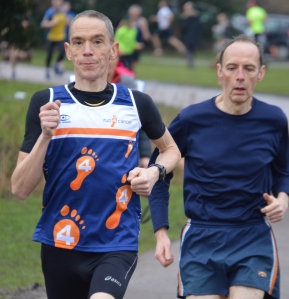 So I signed up for one of the flattest courses in the UK, The Greater Manchester Marathon, created my own hashtag (why not?!) #RoadtoManchersterMarathon and decided on a very basic training schedule: continue running to and from work every day (i.e 20km a day), if possible join a parkrun for speed, a long trail because that is what I like most and further more … just see how I feel. The funny thing is that this last item

‘how I feel’ resulted in many different runs: complete slow, suddenly a few kilometres at a good pace, a fast or at least intensive kilometre at the end going uphill to work or home …

For me especially more motivation was needed to do regular speed training, so how to get out of this pothole and back on the uphill road to Manchester?

I decided to start run for a charity promoting outdoor activities for people and families which are struggling with cancer or who are recuperating from it, Run4Cancer.

Unfortunately, also in my own family and family in law cancer has caused a lot of grief, with my mother and mother in law passing away some years ago due to cancer.

Organising things to raise donations really gave me the motivation I needed. Telling people of my goal for the marathon and reasons for the chosen charity pushed me to start doing regular speed training sessions like: 8 times 1km, or 3 times 3km, or 10 time 400m. Why? Sharing my plan forced me mentally to actually start what I needed to do!

And it was fun also, putting daily fruit on the table in the office, having Easter Soup with my colleagues and organising the Chorley-ROOTZ trailrun from the ROOTZ Coffeeshop in 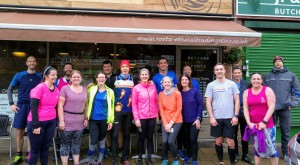 Chorleywood. The last was so much fun that I will continue to organise these: run through the English countryside for 1.30 and than enjoy a good coffee, tea with cake afterwards, what else would you want?

So out of the pothole, away from the down hill motivation, the month of March was all uphill … even when there was snow and mud … and my Fleet Half Marathon test run cancelled due to snow mid-March! 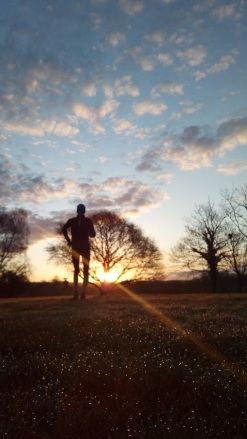 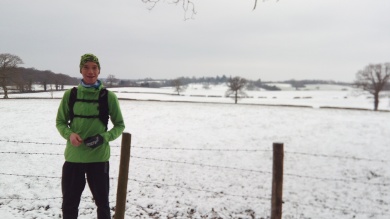 I have run enough marathons to know miracles do not exist but if all stars align in perfect order who knows? 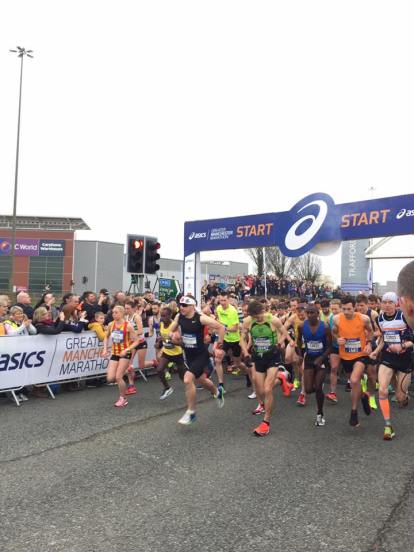 The weather was tip-top, with no wind and approx 9 – 10 degrees Celsius … and … although 10.000 people joined the marathon I could start right on the starting line! There is no large group of elite runners in the Manchester marathon (winning time 2.20) so when you run near 2.40 you are allowed in the first start section and even up to the start line when the gun goes off!

I felt great, having seriously tapered the last week with only 5km runs, some core stability exercises, no alcohol and consciously not eating suddenly too much. Do not worry … I have fully indulged myself massively with plenty food and especially two days with huge Ice-creams as dessert!

I could keep a good pace passing 10km in 38.06 and half way 1.20.52. I knew 2.40 was too fast but keeping 3.50 per kilometre seemed achievable … until … around 23km I felt my legs slowly stiffening due to fatigue and cold. I am a ‘cold person’ and the 10 degrees was just a little too cold for me. But that is the fun and adventure of the marathon!

The internal mental struggle starts … continue or stop … slow down? Now way! … think of the charity … think of the potential running bonus … stop moaning … get going … the downhill thoughts stopped and I was able to keep going, a little slower but still OK!

The last kilometres were brutal and painful but also great! Edwin had caught with up after running a more flat race and together we pushed for the last stretch passing the finish together … in … 2.43.52 … HAPPY! 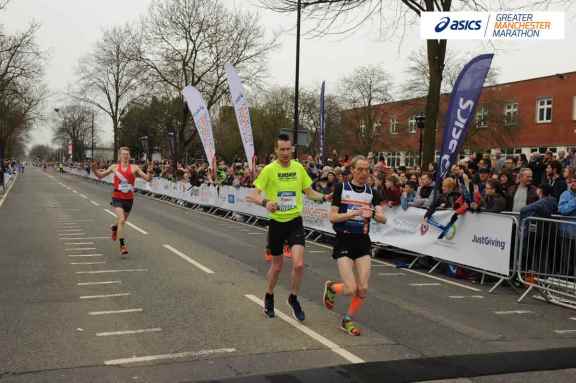 More than 500 GBP raised for Run4Cancer! 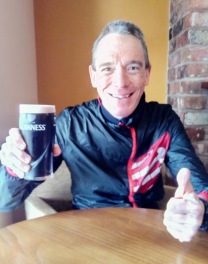 Is it enough for the Dutch military team? That is up to the coach to decide. Three days of sore calves tells me this was the maximum achievable at the moment. Faster is surely possible when my training is more focused on the marathon I am sure … but for now … relax and enjoy!

Some (maybe not very) interesting facts 🙂

I ran on Brooks Hyperion road race shoes, used Compressport tubes to reduce calve stiffness (‘Dutch’ orange coloured for additional motivation!), and was further dressed in a running short, a short sleeve shirt with a Run4Cancer running top and a buff.

My breakfast followed my ‘usual marathon routine’: alarm at 0500 with a start at 0900, four white buns with jam and honey together with two cups of strong coffee and a bottle of energy drink. No more drinking after 0600 besides a cup of tea, one gel and a little energy drink before the start.

The refreshments post during the race were excellent with real water bottles instead of plastic cups (which do not allow you to keep running and take a small sip now and than). My drinking plan was for some water every 10km. However, due to the cold I did not need that much water, which was OK because the water bottles were rather cold themselves!

Other bonus were the gels provided. I started with four of my favourite TriSportPharma gels Ratio 2:1, one just before the start followed by one every 5km. However, I did not want to carry many more gels due to the weight so I was glad to know the organisation provided real gels instead of the usual only banana, cookies etc. Well done for Manchester!

Will I run the Greater Manchester Marathon again?

I do not think so, at least not because of the atmosphere. The marathon navigates Greater Manchester with very lively parts in suburbs but also very dull parts.

OK, I understand this part but why start and finish both on a wide road near a shopping mall and not in the city centre with live music, open pubs and fully pack terraces!

On the other hand … maybe yes, only because indeed it is flat, fast, easy to start in front and has well organised refreshment posts. But I think I will try London in 2019! 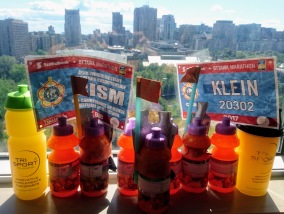 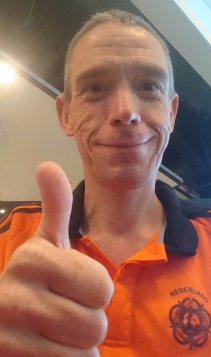